Plug loads can average approximately 30% of electricity use in office settings, much of which can be attributed to parasitic loads (power draw of a plug-load that is not performing useful work). Source: Office Plug Load Field Monitoring Report

Plug load control comes in two basic forms. Energy savings are achieved when the device is either transitioned to a low-power state, or it is de-energized to eliminate the power draw. Both can be executed either manually or automatically. A low-power state is between a de-energized state and a ready-to-use state. This includes standby, sleep, and hibernate modes as well as any “off” state that has a parasitic power draw. A de-energized state is when electricity is not being provided to the device. This is analogous to physically unplugging a device’s power cord from a standard electrical outlet.

The most prevalent plug load contral strategies include:

Manual Control: Most plug-loads can be manually powered down with built-in power buttons, shutdown procedures, or a control device that energizes and de-energizes electrical outlets based only on manual input. The effectiveness of manual control depends entirely on user behavior and should be implemented only if no other methods apply.

Automatic Low-Power State: The first, and in some cases most effective, control method is a built-in, automatic low-power state functionality such as standby or sleep. Some manufacturers include this functionality to reduce energy consumption of idle devices. Internal processes monitor idle time, and when the device has been in an idle state for a given period, it will power down to a low-power state.

Schedule Timer Control Device: Certain plug-loads have predictable load profiles. These devices are used during the same times each day or at regular intervals. A scheduling-control device can effectively manage a predictable plug-load. It applies user-programmed schedules to de-energize the plug-load to match its use pattern and energize the plug-load so that it is ready for use at the time when it is required.

Load-Sensing Control Device: Plug loads may have a primary-secondary relationship. A primary device, such as a computer, operates independently of other (slave) devices. A secondary device, such as a monitor or other peripheral, depends on the operation of other (master) devices. A load-sensing control device should be implemented for such a relationship. It automatically energizes and de-energizes secondary devices based on the “sensed” power load of the primary device(s). Whenever the primary device goes into a power state below a given threshold, the load-sensing control can power down the secondary devices. The sensed (primary) load is typically an electrical outlet or an auxiliary port (e.g., universal serial bus (USB) in the case of a computer).

Occupancy-Control Device: Occupancy control can save a great deal of energy as it energizes plug-loads only when users are present and de-energizes them when the space is vacant. This approach pinpoints the main source of wasted energy during non-business hours and reduces wasted energy during business hours. However, the largest drawback is that occupancy controlled devices may energize and de-energize outlets at inappropriate times.

Manual-On, Vacancy-Off Control Device: A manual-on, vacancy-off control device is a slight modification of the occupancy-control device. It energizes a plug-load when it receives manual input from a user and de-energizes the plug-load automatically based on lack of occupancy. This control should be implemented for plug-loads that are needed only when users are present (e.g., task lights, monitors, and laptops).

Plug loads are the electrical loads in a building due to the various devices that are plugged into receptacles. Examples of plug-load devices include, but are not limited to, the following: computers, printers, task lights, vending machines, desk fans, etc. Recent research shows that desk-based technologies and electronics in office settings can consume significant amounts of energy that are often not taken into account in energy monitoring and reduction strategies. These technologies are generally under the control of individual workers rather than centrally operated, making plug loads "orphans." They are usually not managed until there is a plan in place to do so

. Workstation plug-loads are not the only challenge. Electronic equipment in shared spaces—such as print/copy rooms and break rooms—can also be a significant energy consumer, and with no one person responsible for turning it off, shared equipment is often left “on” indefinitely.

Every ton (about 40 cartons) of 30% postconsumer content copier paper saves the equivalent of 7.2 trees 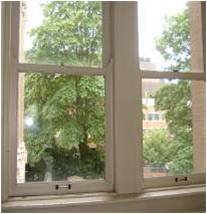 Comfortable workers are more likely to be productive and engaged with their work than those who struggle to work in spaces that create barriers and stresses. With an ever increasing number of environmental issues to be mindful of when designing spaces, GSA is developing practices that support both sustainability and worker comfort.