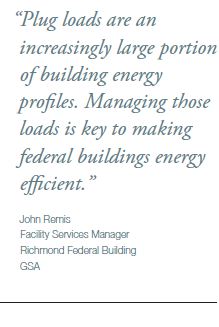 Plug loads refer to energy used by equipment that is plugged into an outlet. In an office, key plug loads include computer and monitors, printers, and copiers. Plug loads can average approximately 30% of electricity use in office settings,1 much of which can be attributed to parasitic loads (or the power draw of a plug-load that is not performing useful work).

You can reduce plug loads by up to 50% at your facility by utilizing an integrated team approach and implementing simple, no cost and low cost plug load control strategies.3 Explore the green hovers and GSA resources below to find out how.

Advanced power strips (APS) save energy by controlling the power supplied to plug-in devices during unoccupied periods. A variety of APS technologies exist on the market that vary in complexity, control strategies, data collection abilities, and costs.

Potential barriers for APSs include: occupant acceptance, communications, lack of personnel time for analysis, and complex controls in some instances. These devices may require operations and maintenance to update controls, manage data, and troubleshoot incorrect operations and communication failures on a regular basis.

Efficiency is a comparison of the amount of energy used compared to the amount of output produced. In the built environment, this means using the least amount of energy (electricity, natural gas, etc.) to operate a facility appropriately. Steps that can help a building run efficiently include: ensuring there are no air leaks, using sensors or timers to ensure the building isn’t operating when vacant, and using energy-efficient equipment.

The energy consumption per square foot of building space, including industrial or laboratory facilitities (e.g., kWh/sq-ft)

Occupant engagement involves communicating with, enabling and empowering building occupants to help meet sustainability goals for the building. This can involve providing information on actions occupants can take to improve building performance and resource efficiency, while making it easy and appealing for occupants to do so (e.g. actions that improve productivity).

Parasitic loads, or standby power, are the power draw of electrical equipment, including computers, printers, tasks lights, etc., when in the "off" state. Some research defines parasitic loads as the power draw of a plug load, in any state, that is not performing useful work.This power is consumed by power supplies, the circuits and sensors needed to receive a remote signal, soft keypads and displays including miscellaneous light-emitting diode (LED) status lights.

Parasitic loads present a large opportunity for plug load energy savings. All parasitic loads waste energy and should be transitioned to the lowest power state possible, preferably completely powered down.

Plug load control comes in two basic forms. Energy savings are achieved when the device is either transitioned to a low-power state, or it is de-energized to eliminate the power draw. Both can be executed either manually or automatically. A low-power state is between a de-energized state and a ready-to-use state. This includes standby, sleep, and hibernate modes as well as any “off” state that has a parasitic power draw. A de-energized state is when electricity is not being provided to the device. This is analogous to physically unplugging a device’s power cord from a standard electrical outlet.

The most prevalent plug load contral strategies include:

Manual Control: Most plug-loads can be manually powered down with built-in power buttons, shutdown procedures, or a control device that energizes and de-energizes electrical outlets based only on manual input. The effectiveness of manual control depends entirely on user behavior and should be implemented only if no other methods apply.

Automatic Low-Power State: The first, and in some cases most effective, control method is a built-in, automatic low-power state functionality such as standby or sleep. Some manufacturers include this functionality to reduce energy consumption of idle devices. Internal processes monitor idle time, and when the device has been in an idle state for a given period, it will power down to a low-power state.

Schedule Timer Control Device: Certain plug-loads have predictable load profiles. These devices are used during the same times each day or at regular intervals. A scheduling-control device can effectively manage a predictable plug-load. It applies user-programmed schedules to de-energize the plug-load to match its use pattern and energize the plug-load so that it is ready for use at the time when it is required.

Load-Sensing Control Device: Plug loads may have a primary-secondary relationship. A primary device, such as a computer, operates independently of other (slave) devices. A secondary device, such as a monitor or other peripheral, depends on the operation of other (master) devices. A load-sensing control device should be implemented for such a relationship. It automatically energizes and de-energizes secondary devices based on the “sensed” power load of the primary device(s). Whenever the primary device goes into a power state below a given threshold, the load-sensing control can power down the secondary devices. The sensed (primary) load is typically an electrical outlet or an auxiliary port (e.g., universal serial bus (USB) in the case of a computer).

Occupancy-Control Device: Occupancy control can save a great deal of energy as it energizes plug-loads only when users are present and de-energizes them when the space is vacant. This approach pinpoints the main source of wasted energy during non-business hours and reduces wasted energy during business hours. However, the largest drawback is that occupancy controlled devices may energize and de-energize outlets at inappropriate times.

Manual-On, Vacancy-Off Control Device: A manual-on, vacancy-off control device is a slight modification of the occupancy-control device. It energizes a plug-load when it receives manual input from a user and de-energizes the plug-load automatically based on lack of occupancy. This control should be implemented for plug-loads that are needed only when users are present (e.g., task lights, monitors, and laptops).

Plug loads are the electrical loads in a building due to the various devices that are plugged into receptacles. Examples of plug-load devices include, but are not limited to, the following: computers, printers, task lights, vending machines, desk fans, etc. Recent research shows that desk-based technologies and electronics in office settings can consume significant amounts of energy that are often not taken into account in energy monitoring and reduction strategies. These technologies are generally under the control of individual workers rather than centrally operated, making plug loads "orphans." They are usually not managed until there is a plan in place to do so

. Workstation plug-loads are not the only challenge. Electronic equipment in shared spaces—such as print/copy rooms and break rooms—can also be a significant energy consumer, and with no one person responsible for turning it off, shared equipment is often left “on” indefinitely.

Metering is the measurement of fuel (such as electricity, natural gas, and steam) and water used in facilities. Meters are useful for determining compliance with building operating plans and other monitoring activities.