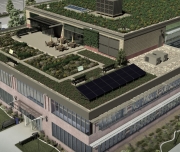 Planted roof systems have a significant impact on the building's overall energy and material consumption. Take into consideration these impacts when implementing a planted roof project in order to optimize building performance.

The thickness, or thermal mass, of a planted roof provides building insulation, retains heat, and reduces energy loads, while also acting as a barrier protecting the roof membrane from exposure. When internal building temperatures rise (server rooms, lighting, people, etc.), a planted roof transfers excess heat through its membrane, media, and plants where it is cooled through modes of evaporation, conduction, and convection. See Living Architecture: Green Roofs for Public Buildings for more information.

Planted roofs take longer to heat up and cool than conventional roofs because of their higher heat capacity (thermal mass). The membrane of a planted roof reaches its peak temperature several hours after that of a conventional roof. This “thermal lag” leads to a reduced mid-day peak heat gain as well as to warmer nighttime temperatures for planted roofs, which can benefit buildings occupied 24-hours a day.

At a municipal level, there is potential to avoid significant energy production at power plants due to this thermal lag. This in turn conserves water (used to create power), minimizes the creation of ground-level ozone, and ultimately reduces city-wide energy dependence.

An energy modeling study on peak summertime cooling demands and CO2 reductions at the city level was performed by Ryerson University. They calculated the impacts of urban heat islands and smog reductions using the city of Los Angeles, California, and determined that the city of L.A. could realize a savings of $100 million a year by turning 75% of its eligible rooftops into planted roofs.

Reduced temperature fluctuations reduce thermal stress.  Benefits of a planted roof are realized through the extended life of the roof membrane, nearby equipment, and its related systems.

A conventional roof lasts 15-20 years, while a planted roof typically lasts 40+. The extended roof life means that a significantly higher return on investment can be expected. As more planted roofs are installed, reroofing activities will become less frequent. This results in saved money, time, and resources (through funding requests, contracting, design, oversight, etc.). Re-roofing half as often also saves “embodied energy.” This includes diversion of waste and reduction in all carbon forming activities involved in the re-roofing process such as manufacture, transportation, installation and disposal of materials.

Rooftop gardens and farms have been recognized as a promising form of urban agriculture, and a way to take advantage of a significant amount of flat space that receives steady sunlight throughout the day.

Be sure to consider: